“Here Heidi, try taste this, we call it “Wasabi plant”, said Ecologist John Gilardi, AKA “da bird man o Wake”.   He plucked some leaves from a little plant, on our way sunset walking to the bird meadow on one of the islets of Wake Atoll.  It was near dusk and very hot, no wind, and water barely quenched our thirst. 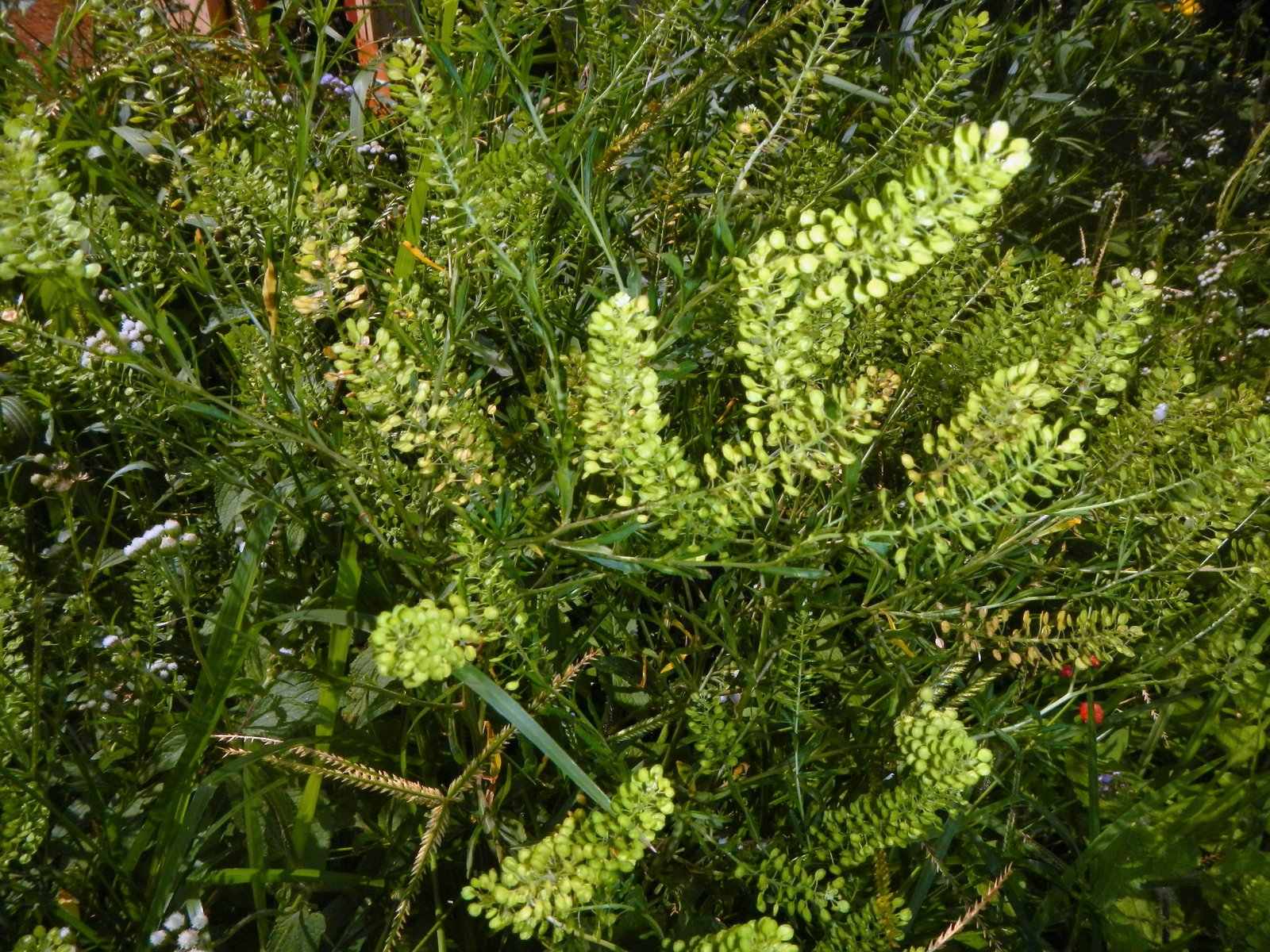 At first it just tasted a bit green and refreshing and then my mouth got happy, almost exploding with a definite wasabi taste.  I got all excited, asked him more about the plant and took some pictures of it.  It looked like a weed, but with papery transparent seeds.  It looked very cute in my pictures.  It was one of many interesting and intriguing native plants on the very remote Wake Atoll, where I was fortunate to be performing some contract Arborist work.

When I got back home, Happily, to cool green high volcanic lush green Hawaii, I did some research about this plant which scientists call Lepedium.

Another name for it is “Garden cress”.  We have one that is a weed and one that is native to Hawaii.

The non-native one is L. latifolium, and it’s been here a long time.  Its mentioned in the flora by Dr William Hildebrand, the original botanist who grew Foster Botanical garden.

Maca root which is found in health food stores, like our beloved KOKUA Market, and said to be good for wahine and for sleep is L. meyenii. (when I was googling for pictures, to see which species grew here, these adds for tinctures of maca root kept popping up!)

Turns out is has many Hawaiian names: kunana, naunau, `Anaunau and `Anounou; and lots of English ones too: Kunana pepperwort, peppergrass, pepperweed, and scurvy grass.

Wonder if its high in Vitamin C?

It is a good source of vitamin C, A, K, and some of the B-vitamins, as well as calcium, iron and magnesium. It’s also rich in fiber, like most green leafy vegetables or herbs.

It is endemic to all the Hawaiian Islands except Kaho`olawe and Ni`ihau, and it is found in Kure, Midway and some of the other islets of Papahanaumokuakea, or the northwest Hawaiian Islands.

It is in the Brassicaceae plant family, along with turnips or daikon, cabbage, mustard greens and our favorite: Wasabi !

The root was used as medicine in old Hawai`i, and in other parts of Polynesia too.

The scientific plant genus name, Lepedium, has kewl descriptive origins too. Lepis is scale in Greek and refers to the pretty papery, scale like semi-transparent seeds. The species name bidentatum comes from the Latin name for tooth, the leaf edges are serrated or toothlike.

I started looking for it and trying to grow it.  Such a fun taste and we do love wasabi here in Hawaii!  I thought it would be fun to grow and to gift for my fellow gardening gourmets!

So far it hasn’t been easy to grow, but we endeavor to persevere.  I find it in surprising places and have been trying to figure out its ideal habitat.

Sometimes it’s in a lawn like at UH Manoa or Kapiolani park. Sometimes it’s by the beach.  Visiting Sweetland farms with my horticulture buddy Rachel Morton, we found it outside the barn where keiki goats were being nurtured.  I got all excited and had Rachel, and co-owner Mary Bello taste it.

Ono yeh? And isn’t it a cute plant?  Imagine if were grow more and had the goats eat it.  Would their milk then be wasabi flavored?

We collected some to grow and so far, so good.  I think that because it’s a very xeric or drought tolerant plant, it must have a deep root and far spreading roots. When I casually pull it out, I might not be getting all of the roots.

Growing it from seeds is a good option.  Horticulture with native Hawaiian plants is so much fun and a great gardener challenge. We always learn something by growing plants and observing our gardens and nature in general.

Has anyone else tried to grow this?

One reference suggested that it would grow best in an herb garden, as compared to a general landscape.  It really does look like a weed until you get up close and see what a pretty plant it is.  Plus growing healthier and possibly medicinal and ONO plants in our gardens is always a plus!

I potted mine up in a mixture of good potting soil and coarse cinder and put them in pots.  Rachel planted hers directly in the soil in her mother’s herb garden in a sunny spot up Tantalus.  We shall see how it all GROWS!

Find me on Face Book